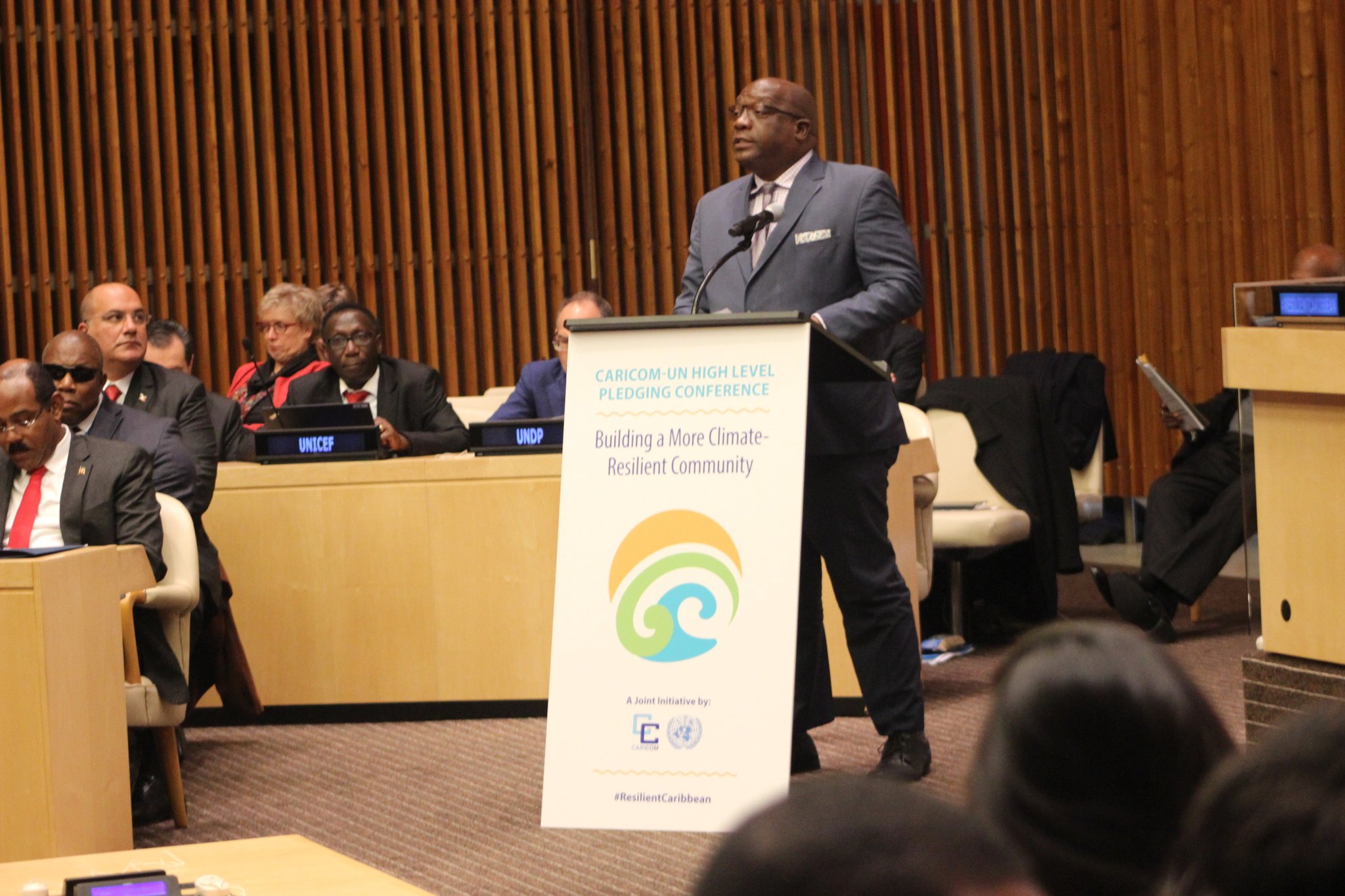 The international conference was organized to mobilize assistance for the reconstruction of Caribbean communities that have been devastated by a series of powerful Category 5 hurricanes.

Addressing colleague Heads of Government, as well as high-level representatives of international development partners, allied countries, private sector entities, foundations and the like at the United Nations (UN) headquarters in New York, Prime Minister Harris said, “Although St. Kitts and Nevis did not experience the degree of devastation experienced by our neighbours, the impact was felt across most sectors of the economy, including road infrastructure, education, health, national security, housing, and agriculture.”

The Honourable Prime Minister further noted that, “We have been helping our neighbours and ourselves, but the task of rebuilding in a timely way is beyond the resources of St. Kitts and Nevis.  We appreciate the support of the donors.”

Dr. Harris was making reference to the $2.5 million in hurricane relief aid that St. Kitts and Nevis has given to several affected islands this year, in addition to in-kind support and services, such as free school enrollment for transfer students.  As for “helping ourselves,” Prime Minister Harris’ administration quickly introduced a Farmers Recovery Support Fund and a Hurricane Relief Duty-Free Concessions Program to assist homeowners whose residences were damaged by the hurricanes.

The Prime Minister of St. Kitts and Nevis discussed the key challenge of financing, arguing that the per capita income approach, which is a significant criterion used in development cooperation funding, is an impediment to Small Island Developing States (SIDS) in securing concessional funding.

“St. Kitts and Nevis like Antigua and Barbuda, having been classified as a high-income country, is not eligible for concessional funding.  Therefore, we have been relying on the use of our own resources to bring the country to a level of satisfactory recovery.  However, there is much more to be done, and as a Small Island Developing State the demands on our limited resources are substantial and create fiscal pressures as we strive to continue the implementation of our development agenda,” the Honourable Prime Minister said.

“In the latter half of the 1990s, the Federation of St. Kitts and Nevis experienced several successive hurricanes.  However, due to lack of access to concessionary funding and policy failures, we had to incur debt on commercial terms, which resulted in St. Kitts and Nevis being classified as the most indebted country in the world. Through the significant sacrifice of our people and the implementation of an IMF austerity home-grown program, we are reducing our debt to a more manageable level,” Dr. Harris said.

The Prime Minister of St. Kitts and Nevis continued, “We would not wish to return to those dark and difficult days.  The recent effects of the hurricanes underscore the importance of revisiting the GDP per capita criterion for the graduation of countries, as it does not fully take into consideration their vulnerability.  Therefore, I advocate support from the donor community in the use of a Vulnerability Index that will capture the unique features of our Small Island Developing States.  I use this opportunity to thank the Commonwealth for its leadership in this area.”

Also addressing the conference, UN General Assembly President Miroslav Lajčák echoed these concerns, stating, “We should not let the people be punished once by nature and twice by outdated economic policies.”

UN Secretary-General António Guterres, who also spoke at the conference, said, “In short: we need a new and better deal for the Caribbean, if these countries are to build climate resilience and achieve the SDGs.”

The UN Secretary-General added: “Today must be about more than speeches and pledges.  It is an opportunity to forge a partnership for a better future, and to deepen a vision for recovery that brings together all actors and puts people at its centre, as active development agents.”

Your ticket for the: PM Harris Joins UN Secretary-General in calling for a new and better approach to assisting in the Caribbean’s Development