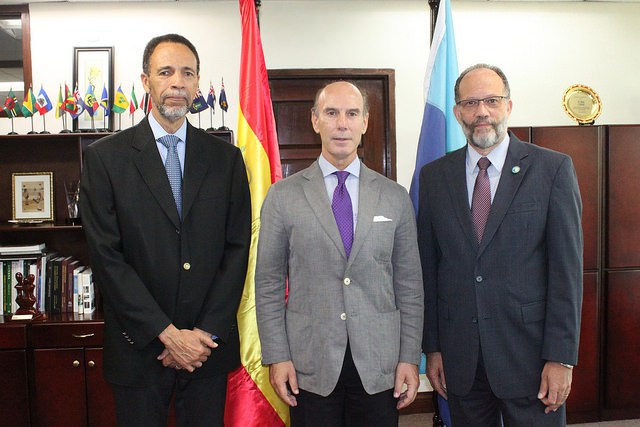 International Financial Institutions (IFIs) including the World Bank and the International Monetary Fund (IMF) are now willing to reassess the policy of GDP per capita attached to concessionary development financing.

Caribbean Community (CARICOM) Secretary-General, Ambassador Irwin LaRocque, said that this was a major result of his recent discussions in Washington with the President of the World Bank and the Executive Director of the IMF.

Speaking on Tuesday, 17 October, at the accreditation ceremony of the new Ambassador of Spain to CARICOM, His Excellency Javier Carbajosa Sanchez, the Secretary-General said the Banks were willing to work with CARICOM, but they cautioned that a final decision resided with the countries which sat on the boards.

CARICOM has been lobbying consistently for a reversal of the policy of graduation which sees some Member States denied access to concessionary development financing. Their graduation to middle income status, with the use of GDP per capita as a major criterion, has attracted commercial rates for development loans. This situation increases already high debt burdens in Member States.

“That debt burden was significantly incurred by reconstruction after major climatic events in a Region designated as the most natural disaster-prone in the world,” Secretary-General LaRocque said.

“What our experience is Ambassador, is that you borrow to build, it gets destroyed and then you have to borrow to build again when you have not yet paid off the first set of borrowing. That compounds the debt burden of our Region.

“In a very, almost diabolical way, construction adds to your GDP. Your per capita income increases and our countries are labelled as middle income. Hence, they cannot access concessional development financing. It is a trap. The criteria of per capita income especially as low lying coastal states, such as ours in CARICOM, must be changed,” he told the Spanish envoy.

The United States – in respect of renewable energy and natural disaster management – and Japan had signalled their willingness to support the Community’s position. Now, the Community is intensifying its advocacy to other Third State partners, including Spain, which has membership on the board of IFIs.

“We need the support of all our partners in getting this through: our partners who sit on the board of the World Bank, the IMF and our partners who participate in the OECD. These are three critical bodies which, together, determine access to developing financing,” Secretary-General LaRocque said.

There is no way, he added, the economy of hurricane-ravaged countries could generate enough economic activities to reconstruct by themselves.

When Hurricane Maria struck Dominica on 18 September, 2017, the island had not yet fully recovered from the ravages of Tropical Storm Erika, which struck in 2015. The total damage and loss then was estimated at US$483 million, equivalent to 90 per cent of Dominica’s Gross Domestic Product (GDP), according to a damage and impact assessment conducted in collaboration with the World Bank, United Nations, and other development partners. The cost of Maria’s damage is estimated as $1 billion US, 200 per cent of GDP.

Hurricane Irma devastated Barbuda (the sister isle of Antigua and Barbuda), the British Virgin Islands, Turks and Caicos Islands, and Anguilla, as well as St. Marten and St. Barts. The islands of Barbuda, Tortola and Josh Van Dyke were left in ruins. Irma also caused significant damage in The Bahamas and Haiti and affected St. Kitts and Nevis. The US Virgin Islands, Puerto Rico and Cuba were also left reeling from hurricane damage.

Thousands have been displaced and are in need of shelter. Critical infrastructure including bridges, roads, harbours, airports, electrical lines, houses, public buildings including government offices, have been significantly damaged.

The principal economic sectors of tourism and agriculture have also been severely affected, resulting in disruption of people’s livelihood.

The CARICOM Secretary-General said that the occurrence of successive Category Five hurricanes “signals a dangerous change in the intensity and frequency of climate change related storms, and heralds the advent of a new normal.”

“When you take into account the old normal that our countries used to be hit once every 50 years or so with a catastrophic hurricane, we are seeing now that the new normal is every five or ten years. We are seeing multiple countries being hit,” he told the Spanish envoy.

Your ticket for the: Major Financial Institutions willing to reassess development financing policy