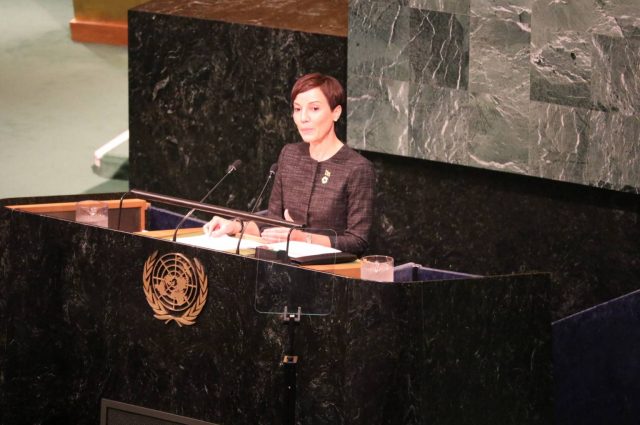 UNITED NATIONS, United States (CMC) — Jamaica’s Minister of Foreign Affairs and Foreign Trade, Kamina Johnson Smith, says the country was “deeply moved” by the onslaught of two massive hurricanes that have forced thousands of people across the Caribbean into a life that is dramatically different from what it was just a few days ago.

“On behalf of our Caribbean brothers and sisters directly impacted by the hurricanes, we wish to thank those countries and organizations which have given without being asked, and to urge those who have the means to support these countries and their peoples, in this time of urgent need,” said Johnson Smith in addressing the 72nd Session the United Nations General Debate on Saturday.

“For us in the Caribbean, climate change is not a philosophical concept, or an academic debate, it is an existential issue,” she added. “It is our reality! It requires urgent and effective action. We are ever mindful of our responsibility to strengthen our resilience and expedite efforts towards adaptation and mitigation.

“Yet, our ability to do so is greatly impacted by the new catastrophic events that cause social dislocation and severe misalignment of our economies,” Johnson Smith continued. “The limited resources that we have are dwarfed by the huge sums required to meet recovery and reconstruction measures.

“How do small states like ours, many already facing adverse debt dynamics, mobilize the financing required to build climate resilient frameworks?” the Foreign Affairs Minister asked.

“To do so, it is imperative that we identify both grant funds and concessionary financing that can support our investment in resilient infrastructure over the long-term. If not, we will continue to be caught in an inescapable cycle of devastation, recovery and reconstruction, until the next natural disaster strikes.

Johnson Smith said while it is essential to attend to the immediate humanitarian needs and reconstruction efforts, long term sustainable developmental goals must also be addressed.

She, therefore, urged that that in collective efforts to implement the United Nations Sustainable Development Goals (SDGs), tremendous challenges faced by vulnerable countries completely knocked off course by external shock be fully accounted.

“In such circumstances, the review and follow-up mechanisms associated with the time-bound commitments in the Agenda are rendered meaningless,” Johnson Smith said. “We call, therefore, on the UN system to establish a mechanism to provide the requisite support and compensation to vulnerable countries affected by natural disasters, where their implementation of Agenda 2030 and progress towards achieving the SDGs have been derailed as a result of such external shocks.”

In recognition of the vulnerabilities as a Small Island Developing State (SIDS) and the attendant complexities of its status as a middle-income country, Johnson Smith said Jamaica, is collaborating with Chile on a new initiative, the “Resilient 20.”

She said that initiative seeks to create an alliance to promote resilience in countries prone to natural disasters, with a focus on middle-income countries.

“This would enable international financial institutions and bilateral donors to better channel financial and technical resources towards countries most susceptible to loss and damage from climate change,” said Johnson Smith, stating that Jamaica ratified the Paris Agreement in April 2017 and regards this historic Agreement as “critical to efforts to arrest the impact of climate change.”

She said SIDS were at the forefront of these negotiations and remain engaged in the COP process.

“It is an inescapable fact that we contribute the least to carbon emissions and yet we bear the brunt of the damage,” she said, imploring all Member States to abide by the commitments of the Agreement.

The Jamaican Foreign Minister also noted that climate change poses risks to tourism, “which owes its competitiveness to the pristine nature of our environment.”

She said sustainable and inclusive economic growth and job creation are priorities for Jamaica, adding that tourism plays a critical role in ensuring that they are achieved.

Noting that this industry relies heavily on the long-term sustainable investments made by the private sector, both national and international, for this International Year of Sustainable Tourism for Development, Johnson Smith said Jamaica has sought to increase such investments, create more jobs, promote culture and support community development, while safeguarding the natural environment.

Stating that Jamaica is “deeply concerned about the heightened menace to international peace and security, arising particularly from the threat of nuclear weapons”, Johnson Smith said her country has had a longstanding commitment to the goal of achieving a nuclear-weapons-free world.

She said Jamaica, therefore, welcomes the first global Treaty on the Prohibition of Nuclear Weapons as “a critical step towards addressing some of these concerns.

“It is our hope that it will enter into force in short order and will be duly observed universally,” she said. “As global citizens starkly aware of how closely our futures are intertwined, we condemn the recent nuclear and ballistic missile tests carried out by the Democratic People’s Republic of Korea (DPRK), which pose a grave threat to international peace and security.

“We urge North Korea to immediately and fully comply with its international obligations under all relevant United Nations Security Council resolutions, and to resume dialogue on the de-nuclearization of the Korean peninsula,” Johnson Smith added.

She said the challenges that currently impede global peace and security require that the root causes of conflict be identified and addressed, adding that Jamaica fully supports the focus placed by the UN Secretary-General on sustaining peace across the continuum: from prevention, conflict resolution and peacekeeping, to peace-building and long-term development.

In Jamaica, Johnson Smith said the government is working to provide citizens with “a safe and secure environment in which to live full and productive lives.”

She said the strategy includes placing greater emphasis on securing the porous borders, through which illicit firearms enter.

The minister said Jamaica has benefitted from the support of its international partners, “and we invite continued collaboration in stemming this illicit trade.

“We, therefore, look forward to the Third Review Conference of the UN Program of Action on Small Arms and Light Weapons to be convened in 2018,” she said. “Furthermore, Jamaica will continue to play its part in supporting the universalisation and implementation of the Arms Trade Treaty.”

Your ticket for the: Jamaica ‘deeply moved’ by onslaught of hurricanes in the C’bean, Johnson Smith tells UN