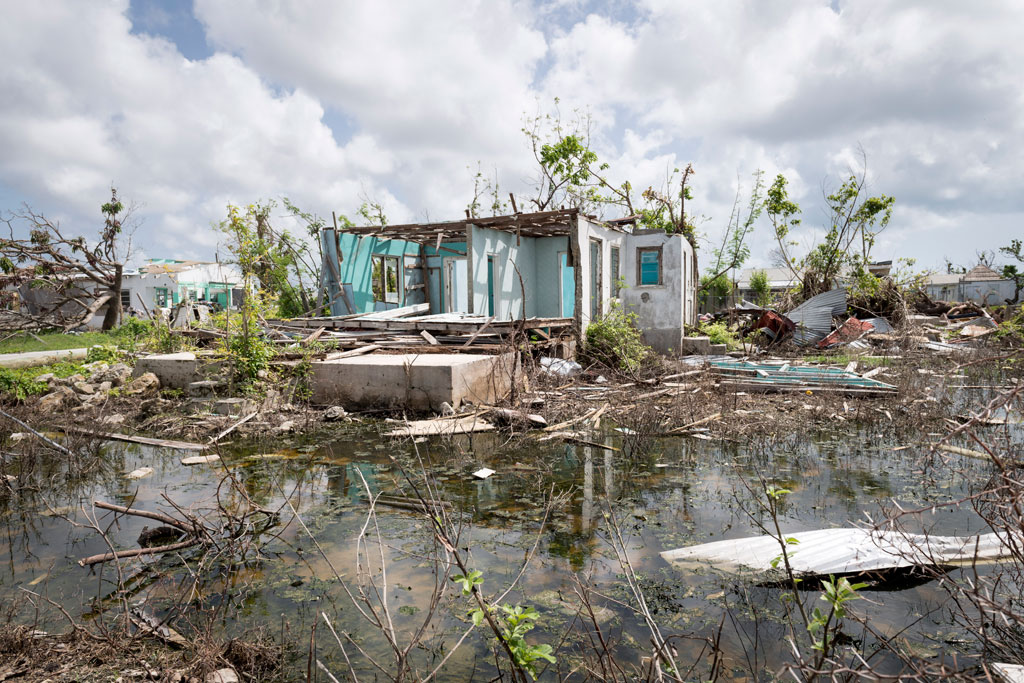 19 October 2017 – Mere mention of the Caribbean conjures up images of pristine waters, beautiful beaches and fun in the sun. However, the images emanating from the region over the past couple of months have painted a very different picture.

“A paradise turned into hell,” was how United Nations Secretary-General António Guterres described Barbuda earlier this month after visiting the island that was ravaged by Hurricane Irma. During a two-day visit to the Caribbean, he also witnessed the devastation wrought by Hurricane Maria on the small island nation of Dominica.

Mr. Guterres was accompanied by Stephen O’Malley, the UN Resident Coordinator and Resident Representative of the UN Development Programme (UNDP) for Barbados and the Organization of Eastern Caribbean States.

“People want to live here for very good reason – they’re beautiful islands, it’s where people have lived for centuries, their families have lived here for centuries,” Mr. O’Malley said in an interview with UN News on the side lines of the Secretary-General’s visit. “So how do you make sure that you use the right techniques to keep yourself as safe, and your country as safe, as possible?”

Mr. O’Malley, whose remit includes Barbados and nine other countries in the region, describes what it was like for him to see the aftermath for the first time, what the priority needs are, and what countries can do to mitigate the risks as well as build back better following such disasters.

UN News: What were your initial impressions when you saw the aftermath of the recent hurricanes?

Stephen O’Malley: Dominica, maybe I’ll start there because I’ve been to Dominica probably 10 times over the last four years. It’s a country that I feel I know quite well. When we were flying in and you were looking down at this ‘nature isle’, as it’s called, and it was totally brown… you could see the trees blown over and hardly any green at all. We came in to land at this small airport and there are all these logs which had come down from the hillsides. They were all along the waterfront. We started driving into the city and, literally, it was like going… I’m from Canada… it was like going into a city after there’d been a snowstorm but the storm was mud and not snow. It had all been pushed up to the banks, on the sides of the street. You had galvanized sheeting, you had plastic, you had mattresses, all kinds of stuff. I had seen the pictures and I have to say it was still very emotional for me to see the effect.

UN News: Can you give us a brief overview of the current situation in Barbuda and in Dominica?

Stephen O’Malley: They’re very different places. Barbuda is part of a twin-island State – Antigua and Barbuda – and is a relatively small island. There’s about 1,600 people there. So they were very badly affected… I mean the infrastructure was very badly hit and then we had another storm coming, another hurricane right behind that. So the Government took the decision, I think wisely, to evacuate the population. Their houses were destroyed. They had nowhere to properly shelter. So they were evacuated to Antigua by plane and by boat in one day, which was really pretty amazing.

And since then they’ve been sheltering here, and the Government has been working on cleaning up the island. What does that mean? It’s pumping out all the standing water. When I went there two weeks ago, you were just covered in clouds of mosquitoes because of the breeding. So clean up the standing water… and then clean up dead farm animals and other animals… and establish a health post… and try and make it a place where, as people are able to, they can come back and they can start working on their homes bit by bit to restore them. They’ve lifted the mandatory evacuation order but for now, people go back and forth during the day.

Understandably, the people who are here [Antigua], who were evacuated, the Barbudans, like people everywhere else, they want to go home. They have one thought in mind – how can I go home? When can I go home? And so in the meantime they’ve been in shelters, and the United Nations – UNICEF, UNFPA, UN Women, IOM – we’ve been supporting them in those shelters. So has the Government, of course. And then some people are with family or friends. But, people want to go home. So, how can that be done in a safe way? What are the minimum conditions that people need? And of course, there wouldn’t be any operational schools there. So what do you do if you have school-age children?

The biggest challenge is that the storms are getting stronger.

Dominica, I was there two weeks ago, and I was just there the beginning of this week as well. You could see the change. You could see that there was actually some green on the hillsides and the roads were clear. There’s a bit more order to things. Civil servants were coming back to work because they were able to get into the city. But you know they still have some very big challenges. I mean we’ve managed to help the Government distribute 60 metric tonnes of food in the last week. We have to keep that up so that people feel safe and secure, that they do feel like ‘okay I’m being properly taken care of, I have enough food, I have enough water, I have enough shelter, things are getting better.’ People have to believe that and if they believe that, that’s a very important psychological boost. They can get the medical care they need, etc.

So, it’s getting better but we have a long, long way to go, and there’s still parts of the country we’ve only maybe been to once or twice because the access has been so difficult. We were very fortunate that we had support from a number of different foreign militaries and they airdropped via helicopter or took boats in and dropped stuff off to a range of coastal communities. More than 50 different coastal communities received some kind of food and/or water drop from, primarily, the Dutch and French military but also the Americans, the Canadians, the Brits and the Venezuelans.

UN News: What are the most immediate needs right now?

Stephen O’Malley: I think the most immediate thing is to keep that good flow of relief aid to people so that they feel comfortable and they feel they’re being properly taken care of. I mean, the water system is coming back up slowly, electricity is coming back up slowly but that’s still mostly in the capital city of Roseau. It’s people in the rural areas who we have to reach in one way or the other. So we need to make sure they have the food and the water, then they can start to shelter themselves. But we still have two more months in this hurricane season left.

UN News: What will be the main challenges going forward?

Stephen O’Malley: I think it will be expensive to rebuild. Two years ago, there was a tropical storm over Dominica – Tropical Storm Erica. It was mostly heavy rainfall… In six hours, it did about $480 million worth of damage. Even two years later, in some places the country’s still recovering from that. So now we have damages which are clearly going to be higher than that. And so where do you get the money, as a small island developing State, to redevelop? So we have the money part.

I think the other big piece… and this is where I think the Government in Dominica is working hard… is what’s the strategy? You need to have a way to get money back into people’s hands. You want to get the economy going again, and then you want to start building real climate-resilient infrastructure.

On Barbuda, I think it’s how do people get back and start rebuilding their lives there. Here you have people who are displaced and they want to go home. How can they do that in a way that’s safe and in a way that contributes in a positive way to the redevelopment of the country? Again, you need a good strategy and certainly there’ll be some funding requirements as well.

UN News: What have you heard from the people you’ve met who have been uprooted?

Stephen O’Malley: I think the biggest thing was the sense of shock at how fierce the storm was. I know people across the region. I know people who were in Dominica, people who told me ‘you know I was sitting in a house’ – a concrete house, we’re not talking about a flimsy, wooden building or a tin-walled shack, we’re talking about concrete-block wall houses – and people telling me ‘I thought I was okay. I was in this house, and then the wind just ripped the roof off.’ It was a terrifying experience for a lot of people.

UN News: In a region that has seen its share of natural disasters, what can countries do to mitigate the risks, as well as build back better?

Stephen O’Malley: I think that’s a very important question. The countries know their location. The biggest challenge is that the storms are getting stronger. And that seems to be the consensus of scientists, that these storms are going to get stronger for a variety of interrelated reasons – the warming Caribbean Sea and other things. We may get more frequent storms but the storms we get will be stronger. So, what do you require to have a house or an office building that can withstand that? It’s interesting, you know you can go to communities and you can see three or four houses that are really badly affected and another one that isn’t. You can look at that house and you can say, ‘well I can see that this house was constructed to building code.’ How do you make sure everybody has the resources they need, because not everybody has the money to build to code. And then, those houses that already exist that need to be retrofitted, again you have to help people with that.

So for me, the technologies are not difficult. They’re not complex. People know them. It’s how do we enforce the building codes. And then, it’s the reality of some of these islands… I mean Dominica is a mountainous island. You have these very steep hillsides and a coast road running along there. In the best of times, you’re getting rock fall and other debris coming down the mountains. So what can you do about that so that every time you have a serious storm, you don’t have your entire road network go down for a week to two weeks? What are some of the other things you can do with the power systems? Now they have one interconnected power system, one interconnected transmission grid, and the electrical company is looking at the question of ‘well, maybe we should split this grid into different pieces so that it might be less vulnerable.’ You can bury the lines. You can see that in the Caribbean, you still have a lot of lines that are strung on poles. And that’s another question – could we bury more of the lines and that would stop the electricity from going down.

So there are things we can do. People want to live here for very good reason – they’re beautiful islands, it’s where people have lived for centuries, their families have lived here for centuries. So how do you make sure that you use the right techniques to keep yourself as safe, and your country as safe, as possible.

Your ticket for the: INTERVIEW: Hurricane-hit Caribbean nations can build back better, says UN development official