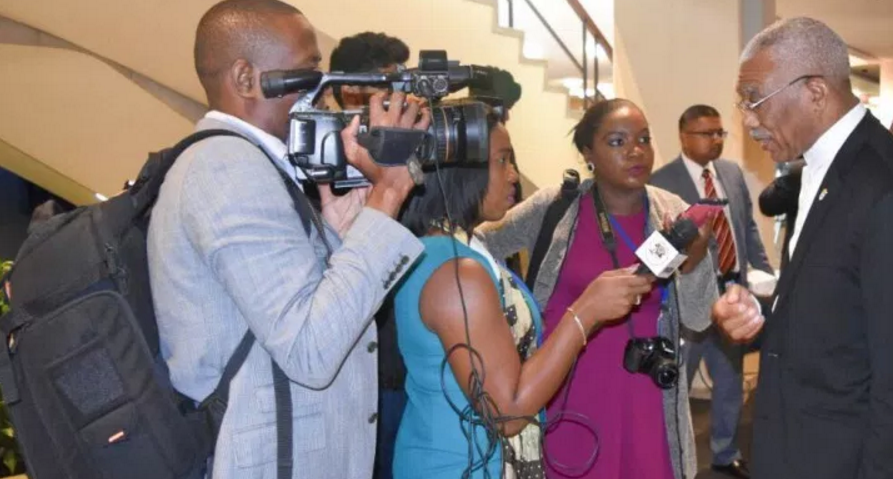 News Roon, Guyana – Guyana’s vast landscape can serve as a “gift” to Caribbean islands devastated by recent hurricanes, President David Granger said today as he sought to get the dangers posed by climate change firmly on the international agenda.

“We are the largest CARICOM (Caribbean Community) state and we have to consider our land space as being the hinterland of the Caribbean.

“We have to sit down and speak to other CARICOM states to see how this gift could be utilised to give the Caribbean people a better life in the wake of these disasters,” Granger told Guyanese media at the United Nations headquarters in New York.

“In my lifetime, I have never seen such a catastrophic series of hurricanes,” the President stated. A government team led by Prime Minister, Moses Nagamootoo and Minister of Citizenship, Winston Felix, is assessing the needs of Guyanese in the islands recently battered by Irma, including St Maarten, the British Virgin Islands, and Antigua, where the sister island Barbuda has been rendered uninhabitable and all citizens evacuated. Some 84 persons in the Caribbean and the mainland United States were killed by Hurricane Irma.

President David Granger speaking to the Guyanese media corps who are currently covering the United Nations General Assembly in New York on Monday, mountainous Dominica, of just about 72, 000 persons, was hit by Hurricane Irma.

“The winds have swept away the roofs of almost every person I have spoken to or otherwise made contact with,” Roosevelt Skerrit, the Prime Minister of Dominca, said in a Facebook post, as he detailed the immediate destruction of the hurricane. “Rough! Rough! Rough!” he said in another post.

“It is clear that climate change is not something that we can ignore; particularly the small island states of the Caribbean have been vulnerable…,” the President stated.

In discussions with Baroness Patricia Scotland, the Secretary General of the Commonwealth, the President has suggested that the protection of Caribbean Commonwealth states, along with relief at times of disasters, be placed on the agenda for next year’s Commonwealth Heads of Government Meeting in London.

Guyana’s intervention of help Caribbean states affected by hurricanes is being coordinated though the Caribbean Disaster Emergency Management Agency (CDEMA) but President Granger suggested there is a need to broaden CDEMA.

“What is happening now is that several islands are being affected simultaneously.

“…so we definitely have to broaden the platform for providing relief. We’ve got to think of evacuation, where these people will go to. You can’t move them from one affected country to another country,” he stated.

“…largely it is a humanitarian situation…we are concerned about Guyanese nationals and the plight of other Caribbean persons; mainly Guyanese who want to come back home – students on scholarships, people who have been injured.”

The President noted that Minister Felix was selected to help lead the effort because of the need for “documentation, citizenship, passports, ID cards and all of that,” of the Guyanese who were affected by the hurricanes.

He said that Guyana has chosen to offer assistance though CDEMA because “unless our efforts were coordinated we would not get the results.”

“There is no point sending a container there which can’t be unloaded, or it has stuff that people don’t need, so we are working through CDEMA,” he stated.

“The Caribbean has got to the drawing board again. We’ve got to create a more effective platform – maybe in terms of architecture, in terms of response, in terms of measures to provide relief to our citizens in different countries – Guyana has got a wide diaspora – but we’ve also got to look at the logistical capability of the Caribbean Community.

“Sometimes you may have goods, but you don’t have a plane to move the goods. Britain had to come into BVI, we’ve got to tie into countries which have those logistical arrangements – ships and planes.

“So it’s not a matter of rice and water – how you going to get it to Barbuda?”

More importantly, the President said, attention has to be paid to mitigation.

“We’ve got to think about how we are going to prevent climate change on the global scale from affecting the small island developing states and also the low lying coastal states because Belize, Suriname and Guyana can also be affected by global warming and rising sea levels.

“Even though we don’t get hurricanes we are going to sea rising sea levels that can jeopardise our sea defences,” the President stated.

He noted that Guyana is a leader in environmental security and therefore has “emphasise that all states of the world must try to preserve the biodiversity, protect the forest, and mitigate or prevent the situation in which greenhouse gases tend to contribute to global warming.”

He added: “So we’ve got look at green technologies, we’ve got to look at environmental measures to extend our protected areas so that gradually global warming could be brought under control and eventually…the tendency for the earth to get warm would be slowed.”

The President noted that Guyana is best suited of all CARICOM states to play its role in the global partnership “to contribute to mitigation, to climate adaptation, by extending our protected areas, by protecting our forests and making sure Guyana continues to discharge that duty to mankind.”

Your ticket for the: Guyana’s land space can serve as ‘gift’ to the Caribbean battered by hurricanes – President Granger