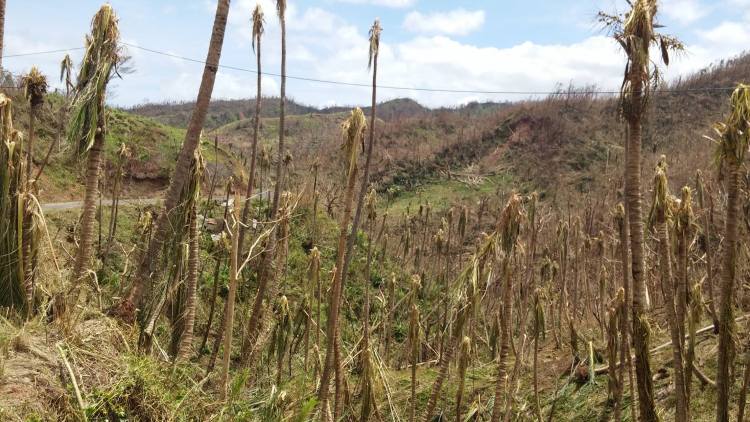 Barton Clarke is confident that the agriculture sectors that were destroyed with the passage of back to back Category Five Hurricanes will rebound with the collective effort at resilient rebuilding.

But more work needed to be done and a greater slice of resources needed to be pumped in to the Region’s agriculture sector to make it more resilient, the Executive Director of the Caribbean Agricultural Research and Development Institute (CARDI) said.

Speaking on the sidelines of a Ministerial Agriculture Meeting at the CARICOM Secretariat, Mr. Clarke was optimistic that with initial steps being taken to focus on the short-term, the two islands that were hardest hit, Barbuda and Dominica, will bounce back.

CARDI Executive Director, Mr. Barton Clarke, speaks about the need for resilient agriculture in the Region from Caribbean Community on Vimeo.

Barbuda had significantly advanced its peanut production and was recently getting CARDI support for the industry, but the hurricane impaired its seed supplies for the upcoming crop. CARDI will screen and store supplies at its seed storage facility in Antigua, Mr. Clarke said.

Antigua and Barbuda had presented its vision for agriculture at the COTED Meeting. Barbuda has adopted a ‘green island concept’ with alternative energy, particularly solar and wind; organic agriculture and compliance with food safety requirements as the main features. Protected agriculture and specially designed smart greenhouses are the pillars on which resilience, readiness and sustainability will be built. The concept also utilises appropriate innovations and production technologies such as rational mechanisation, selected germplasm, efficient use of water resources and intensive systems for small ruminants. The concept will ensure that zoning and land use practices will not compromise the integrity of the environment.

Replanting of short-term crops such as lettuce, Chinese cabbage and ochro, for example, has begun in Dominica. Root crops, which made up a sizeable part of Dominica’s sector, can rebound “relatively quickly” as opposed to tree crops, he said and there could be a fast turnaround in the poultry sector, for example.

“… once you can access the baby chicks, in six months’ time you have eggs… Tree crops you would have to get the trees in the ground and they will take a few years before they begin bearing. But In two years’ time we will be back to being a major supplier of food to the Caribbean,” he said.

CARDI Executive Director, Mr. Barton Clarke, speaks about the need for resilient agriculture in the Region from Caribbean Community on Vimeo.

The CARDI Head pointed to the necessity for climate-resilient agriculture in the Community. Antigua and Barbuda has already incorporated some of those elements – such as protected agriculture – in its green island concept.

According to Mr. Clarke, CARDI is looking at protected structures for crop production and getting the best types for the Caribbean.

He pointed as an example, to livestock production systems where animals were now housed in pens rather than “running around”. The pens, he said, were modified so that they can withstand the increases in temperature. He said CARDI is considering the work done in countries such as Israel, the Dominican Republic and Barbados where animals are fed in protected housing which limits their exposure to the temperatures and increases their productivity.

“You see where they have introduced wind tunnel technology for poultry where we have poultry operating in essentially air conditioned environments where the temperature is regulated … ,” he explained.

He added that the systems have been extended into the crop arena as well. He pointed out that there was solar cooling technology to bring down the heat in the protected structures. CARDI is also collaborating with the University of the West Indies to look at cooling the structures.

“Then we have to look at drug and heat-tolerant varieties of plants; we’ve done some work on pigeon peas, corn, sweet potato, dasheen.

Your ticket for the: Climate resilient agriculture in focus as Barbuda, Dominica begin to rebuild