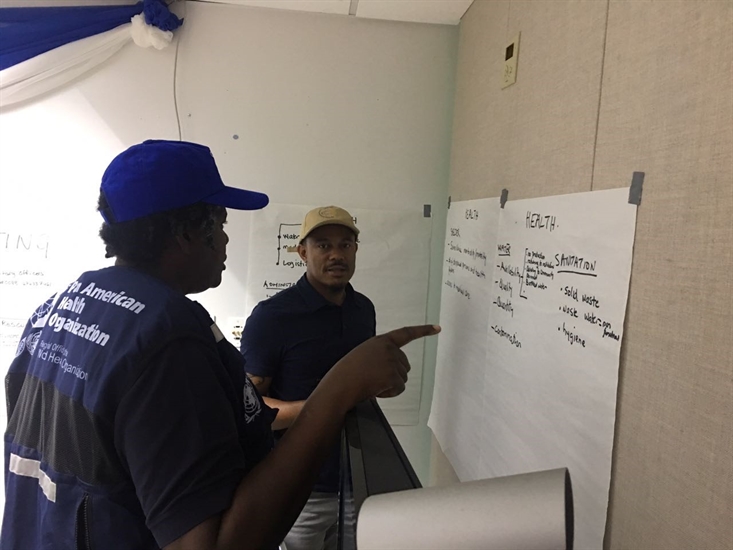 On Sunday, September 10, 2017, the Caribbean Public Health Agency (CARPHA), as part of the Regional Response Mechanism (RRM) which is spearheaded by the Caribbean Disaster Emergency Management Agency Coordinating Unit (CDEMA-CU), deployed a member of staff to assist the British Virgin Islands (BVI) in the post-Hurricane Irma Response.

Irma, a category 5 hurricane with winds up to 185 mph affected Anguilla, Barbuda, BVI, Haiti, Turks and Caicos and other islands earlier this month. Residents were forced to flee their homes, lives were lost, and infrastructure damaged. Communication and transportation systems went down in many instances, due to the damage to roads, power sources, air and sea ports, and communication structures.

CARPHA, as part of the Rapid Needs Assessment Team (RNAT), is providing support to the Ministry of Health officials in conducting assessments of the health facilities, public health systems, shelters and vector control situation. CARPHA is also supporting the response by remotely assisting other affected Member States through provision of technical advice on the conduct of vector control assessments; and is working closely with the Pan American Health Organization (PAHO) to coordinate the vector control response in all affected Member States.

CARPHA provided technical assistance in 2016 and 2015 to the Bahamas following Hurricane Matthew and Hurricane Joaquin respectively. The Agency also provided support to Dominica in the aftermath of Tropical Storm Erika in 2015.

In accordance with the Inter-Governmental Agreement (IGA), CARPHA, as the sole public health agency for the Caribbean region, is mandated to respond to emergencies including pandemics, hurricanes, earthquakes and flooding. CARPHA is on stand-by to assist and support other affected Member States in the post-hurricane response.

Your ticket for the: CARPHA Deploys Staff to Assist Hurricane-Devastated British Virgin Islands